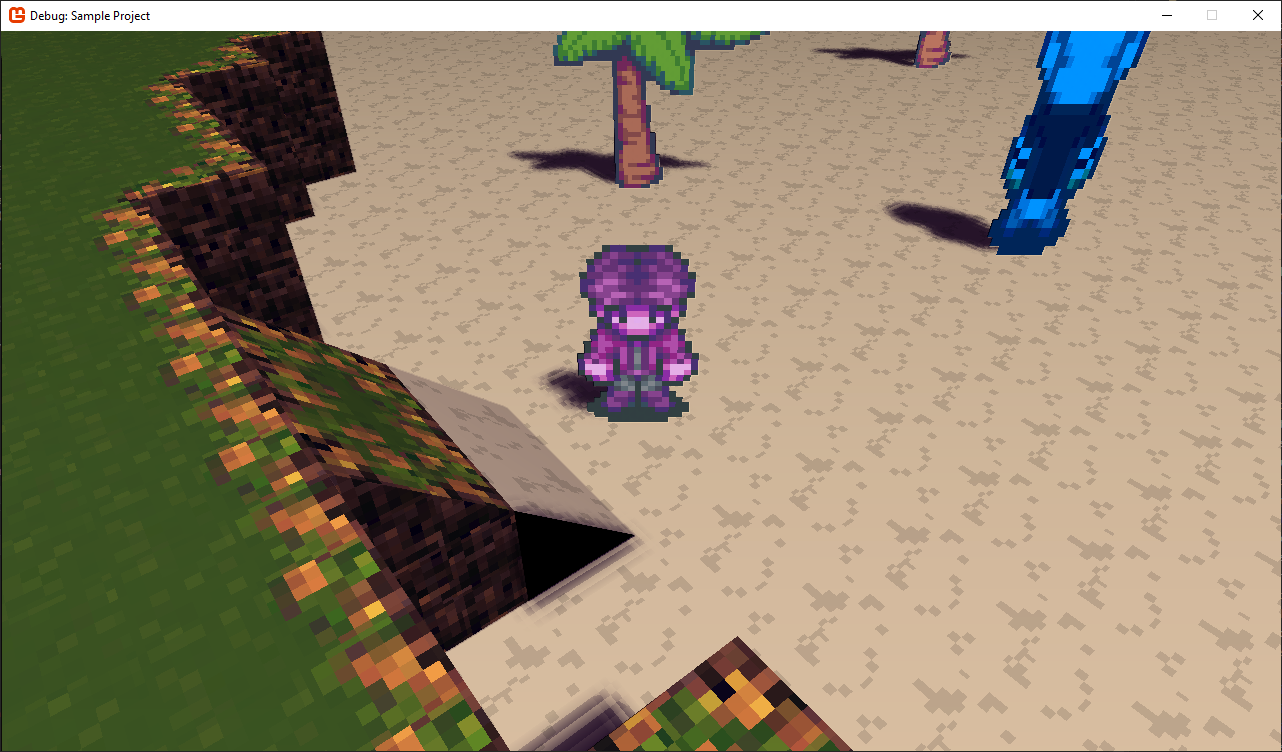 I’ve been hard at work over the past week or two on some general quality of life updates for the engine. Some of the new “features” include a hue-shifting function (which presently only shows in-engine, but working on expanding to show in the editor), as well as a flash target ability (e.g. to flash a hero white during an animation — or perhaps another color).

In addition, there have been a few fixes to rendering. Previously, neighboring tiles could not be transparent, or it would cause issues with shadows having occasional “banding” where a transparent pixel was grabbed by the pixel shader, due to precision loss. I found a better strategy (shifting by sub-pixels before hitting the shader), which results in no precision loss. Additionally, rendering in 2D now honors the layers appropriately based on character bounding boxes/layer heights.

A bug was discovered with the physics and random movement (again, precision loss — previously my bane) that caused characters to accidentally “teleport” under the correct conditions, which has been resolved. If you want that effect now, you’ll have to set your entities speed to something obscenely high — sorry for not allowing flash steps anymore, folks!

One of our newer patrons, Noobk, has started to work on some custom pixel work to play out with the engine. Funny enough, he was given a “demo” to play with and backed the Patreon by the end of the same day after “becoming a believer.” I wanted to highlight some of his work above, as I have a feeling everyone will be seeing more of his work as the project progresses. Please note that the layers are not perfect and collision has only been implemented in 3D spaces, so characters are walking over areas they wouldn’t normally — this was only shown for the sake of showing some of the pixel art and animations (with five frames).

On the battle engine — progress is being made. One of the questions I ask myself over and over is how someone will use RPG Architect. Ideally, users will be given something that’s easy to work with and customize to their own desire. However, it needs to be complex enough that it can support additional layers to interject different things. In the simplest case, a user should be able to go to a pre-built battle/user interface and switch out graphics or sounds. In a more complex case, a user should be able to switch out entire systems, rebind menus, and essentially reconfigure what that aspect of the engine means. As such, the battle system is taking a bit longer than I had hoped, but I think the end result will be worth it.

I’ve made progress towards allowing for selection of targets on the menu beyond the above (disregard some of the debugging on highlights of the actors in the scene — that was temporary), which will then lead to queueing up the action (or performing it instantly, depending on how the system is configured in the database), performing the action at the correct time, and then adjusting the stats on the enemy or hero involved.

Formulas are customizable… for everything. Success of a skill/item, warm-up, cool-down, damage, effects, and so forth. I ripped out the old code that was using a less speedy formula parser/evaluator (which is also noticeable in the fact that the “counter” at the bottom of the character goes from 0 to 100 very smoothly — before it was rendering at about 3-4 fps) and replaced it with something superior (formula evaluation is literally millions of times faster) and a bit more customizable.

After launching the Patreon for RPG Architect, we’ve gained about 10 people in under two weeks. I’d like to thank everyone who believes in this project (and who have come to believe in it) enough to put their own money into it. Your support helps cover startup business costs (re: I’ve outsourced some of the shader work, because that’s not my strength, though I’ve become better as you can see with the hue-shifting functionality!) and gives me money to pass along to people who are writing tutorials and providing you with support, such that I can continue to build out RPG Architect.

Thank you so much for your support so far. I’m looking forward to building this community further and giving you the engine you may not have known you always wanted!

The Road to Steam!