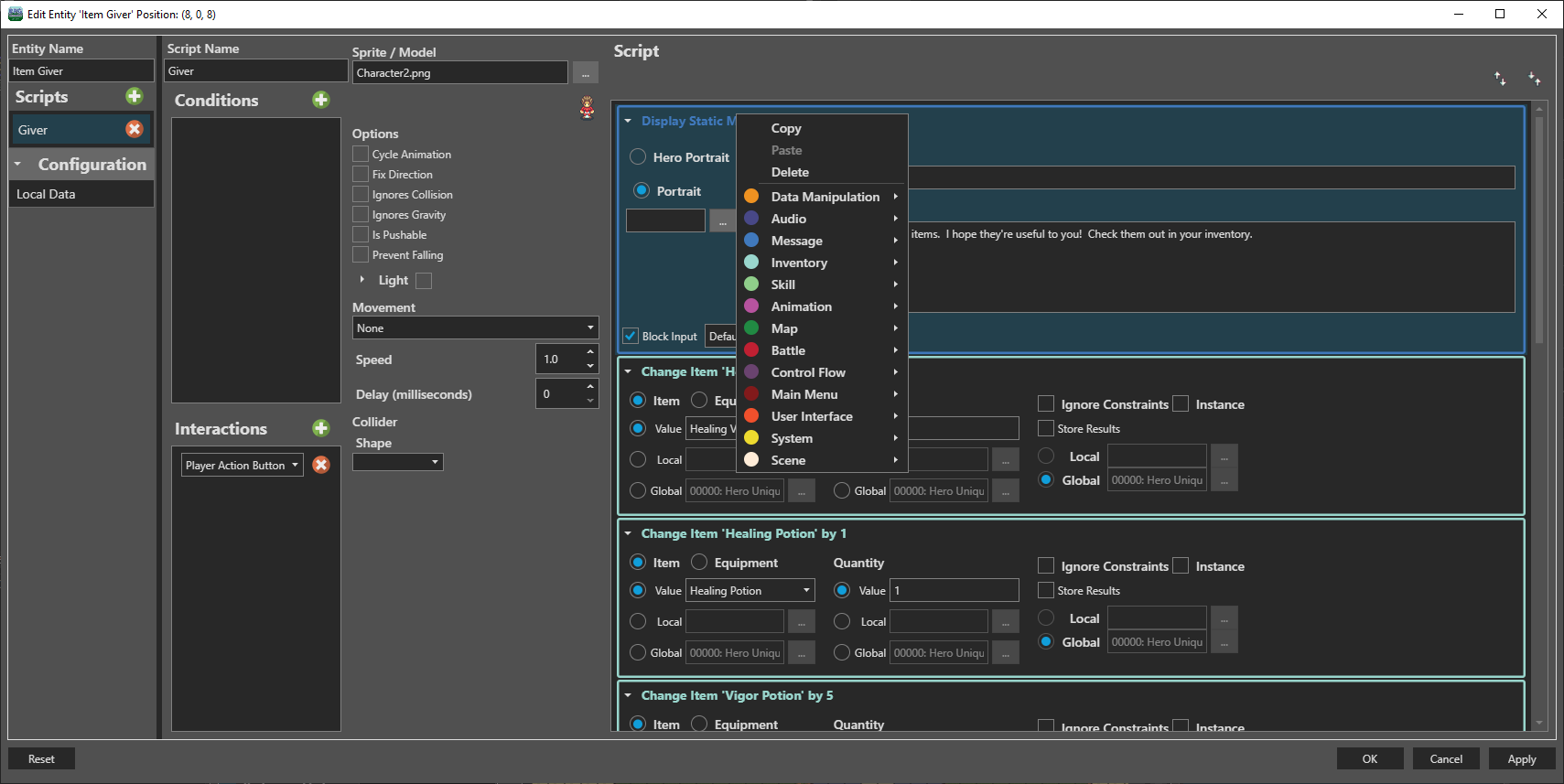 Quality of life has always been important when developing anything, and as such, I took the opportunity to have a bit of a break from working non-stop on RPG Architect and enjoyed a minor “vacation” in the world of Aionios — probably the last game I’ll play between now and RPG Architect getting a full release on Steam.

A number of quality of life bugs were worked on this month, due to getting more patrons who started actually using RPG Architect. On the plus side, these have been addressed, so the editor and engine are more stable going forward. So, what exactly got updated?

First off, a number of bugs related to switching projects have been updated, regarding after-images and old data showing. There were also a few issues with switching tilesets, which caused drawing to fail in the map editor, which has also been rectified. In addition, copy/paste was added for maps, and a notification for if maps have been modified. An added mode to “revert” maps to their original, unsaved state was also added.

In the engine, there was an issue with how projecting walls would appear. For east and west, everything was as expected, but north and south had some issues, which have been sorted out now.

Keyboard shortcuts were brought up by supporters, so we added those as well to quickly/effectively navigate thru editing maps. The infographic below shows all of the new shortcuts for drawing tools, mapping modes, and tile modes, in addition to the already existing shortcuts. Credits to Tolin for building the wonderful infographic below.

Progress was made to add status effects and “battle conditions” while some refactor work was done on conditions in general (e.g. when setting up an Entity) to make everything more clean. Scripting was refactored significantly to have color context clues on the menu as well. I was informed by a supporter of color blindness and will likely be adding a feature (eventually) to help color correct some things in the editor. It’s been added to the JIRA board in the very least.

One of the biggest pieces of news I have is that we are going to officially add a “bigger” set of resources than original planned. Bert of Bit by Bit Sound is donating nearly 30 songs from his various packs to be used in RPG Architect. Tolin has put together all of Final Boss Blues‘ Open RTP tiles into the RPG Architect format. Noobk has put together some amazing bases for both low-definition and high-definition sprites.

These are not necessarily in the templates just yet, but they’re being added slowly. A new “template” is in the works and should be arriving sometime in September to early supporters.

I worked on updating the shader to handle pixel-rounding, so pixels will now be nearly “perfect” (and not skewed) for 2D mode — the downside is that it introduces vertical lines of the background color sometimes, if the neighboring texture coordinates are transparent. With some cases, you won’t notice it at all.

Speaking of JIRA from earlier — we migrated! We’re now using GitHub to track things, for the sake of clarity/transparency. Check it out at:

Battle flow is also working — condition enter/exit and status effects are being acknowledged… so much so that you can defeat all of the enemies and the battle ‘ends.’ Not much else is done just yet, but it gives room for things to be expanded upon.

There are a lot of complexities going on behind the scenes, making way for the future. The next month will likely expand upon this, getting us closer and closer to where we want to be.

Patreon had a few comings and goings — but we’ve increased to 17 supporters this month, with an overall positive momentum.

On a personal note, my second child is being born at the time of this update (I plan these updates out a bit in advance, updating a day or two before they get posted). Updates will slow a bit for the next few days, but will likely start building momentum again during the first week or so of September. In the meantime, during the sleepless nights and downtime (I’ll be in the hospital with wife for three days), I’ll be researching Steam Early Access to get us moving forward in the right direction.

Thank you so much for your support so far. I’m looking forward to building this community further and giving you the engine you may not have known you always wanted!

The Road to Steam!